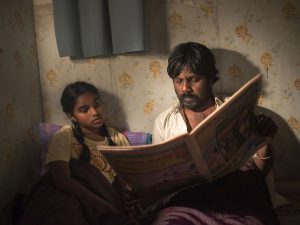 Dheepan, a former Tamil Tiger fighter, a young woman Yalini and a nine-year-old girl Illayaal have fled war-torn Sri Lanka and are now living in France, on a housing estate on the edge of Paris. Their problems, however, are far from over. They are a fake family, strangers who had joined forces out of expediency, asylum being granted more readily to family units. As a result there are ongoing tensions within the group. Also, the estate in which they are housed is dilapidated, overrun by drug traffickers and regularly erupts into violence. Meanwhile, the past proves difficult to shake off when Dheepan is contacted by a sinister Tamil colonel with his own dangerous agenda. Will Dheepan and his “family” be able to find the new life of which they dream? An original look at a very topical issue, “Dheepan” won the Palme d’Or at Cannes in 2015.