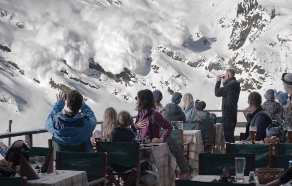 The destructive power of nature and the damage so easily inflicted by human beings are both much in evidence in “Force Majeure”. During a skiing holiday in a seemingly idyllic Alpine resort a seemingly idyllic family, Tomas, Edda and their two children, is torn apart by Tomas’s reckless act of self-interest in the face of a natural disaster. His split-second decision to put himself out of danger, ignoring his wife and children, whether an act of cowardice or simply the overwhelming instinct for
self-preservation, will reverberate for the rest of his life. A powerful film that successfully blends intense psychological drama with thrilling cinematography.