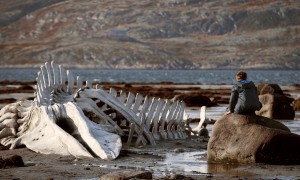 The coast of the Barents Sea, northwest Russia, the present day. Middle-aged Kolia, married with a teenage son, lives in the modest house that has been in his family for generations. Modest it may be, but the house sits on a desirable plot of land overlooking the sea and is just ripe for development, according to the town’s corrupt mayor Vadim. The mayor, little more than a gangster with an office, wants to buy up Kolia’s land at a knock-down price and is used to getting his own way. Kolia, however has other ideas. But what chance does he have when Vadim controls the police and the courts and even has the blessing of the Orthodox Church? Socio-political satire on a grand scale, “Leviathan” portrays a microcosm of contemporary Russian society.