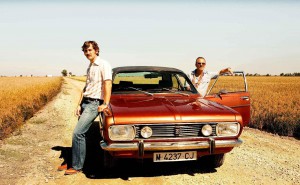 Sponsored by Sim at Cafe Portico

In the remote and treacherous Guadalquivir Marshes of Southern Spain two mismatched cops are investigating the murders of two teenage girls. In a brooding and sinister atmosphere, redolent of the American Southern Gothic genre, the cops uncover an enclosed world of hostility and perversion. It is 1980, five years after the death of Franco and Spain’s fledgling democracy is in the balance. Pedro, the younger of the cops, believes in the new Spain and is determined to uphold its values, whereas for the middle-aged Juan, a product of the Franco regime, old habits die hard. Does Juan know more about the crimes than he is letting on? What is certain is that he already has blood on his hands from the recent Fascist past. With its tremendous sense of place and period “Marshland” is as thrilling as it is thought provoking.