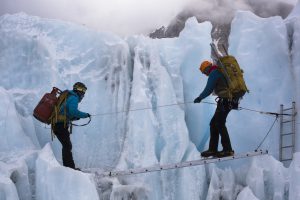 This eloquent documentary, filmed at the time of the 2014 avalanche, the worst in Everest’s history, in which 16 Sherpa guides were killed, is a tribute to the quiet courage and moral fortitude of the Sherpa people. The film explores the ancient culture of the Sherpas and their increasing frustration at the lack of recognition their vital work receives, both by the Nepalese government and certain Western tour operators. We learn that , while wealthy foreigners can pay up to $70,000 for an expedition, the indispensable guides receive a pittance and often have to put up with a cavalier, if not downright racist, attitude from certain Western climbers. Matters are brought to a head by the 2014 disaster, causing many Sherpas to call for the climbing season to be cancelled. A fascinating documentary that at last allows Everest to be seen from the Sherpa perspective.

Winner of Best Documentary at the London Film Festival 2015.