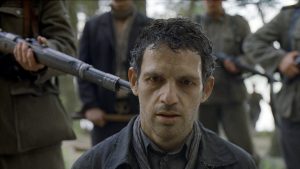 “Son of Saul”, astoundingly the first feature by director László Nemes, has garnered praise throughout the world for its deeply felt evocation of the Holocaust. A prisoner in Auschwitz during the closing months of World War 2, Saul Ausländer is forced to work as a Sonderkommando. He earns illusory privileges by helping control the other Jewish inmates, effectively oiling the wheels of the Nazi extermination machine. In a desperate last act of defiance and moral redemption he determines to give a young victim of the gas chamber, whom he claims to be his son, a proper Jewish burial. Imaginative cinematography and use of sound ensure that the film homes in on the plight of individuals, with the general horror of the Holocaust unfolding slightly out of focus in the background. A must-see film that has triumphed both at the Oscars and at Cannes.