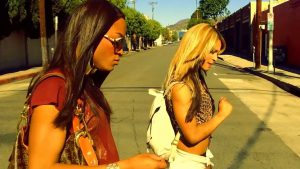 This zero-budget feature concerning two transgender prostitutes Sin-Dee and Alexandra bursts upon the screen in all its garish glory! It has achieved a certain renown for having been shot on an i-Phone. This achievement, though remarkable, should not overshadow the considerable merits of the film itself. With restless energy Sin-Dee and Alexandra launch themselves on to the mean streets of down-town LA, the former in the hope of settling her boyfriend problems, the latter in search of her dream of becoming a singer. What we witness is hilarious, touching, shocking – but never patronising. Lent an authentic urgency by the method of its filming, “Tangerine” is truly an event in the annals of the cinema. (Strong language throughout).