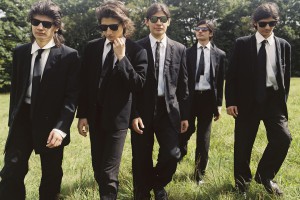 We all have our favourite films and who hasn’t enjoyed quoting a favourite line! This is also the case with the six Angulo brothers, age range pre – teen to early twenties. However, they not only lap up the latest Holywood fare, they actually live it, cooped up in their cramped New York apartment, which they are forbidden to leave by their controlling father. He believes it is his duty to shield his children from the evil that lurks in the outside world. Bizarrely enough, however, he thinks nothing of allowing them access to the cinematic portrayal of society via DVD! As a result films have become the brothers’ world, the real thing being off limits. Far from being a grim tale of imprisonment though, this unique documentary shows us six charming and good natured young men, relaxed in each other’s company and eventually taking their first tentative steps out of the cocoon!