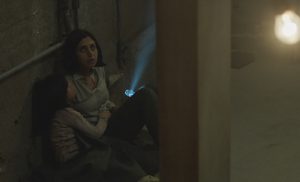 This impressive BAFTA winning debut film from Iranian-born British director Babak Anvari homes in with an increasing sense of foreboding on evils, both supernatural and real, that lurk beneath the surface of apparently normal lives. Set in Tehran in 1988 during the Iran – Iraq war, “Under the Shadow” centres on a professional couple and their young daughter who find their way of life increasingly frustrated and threatened by the powers that be, enemy bombardment and strange, inexplicable events that may be the work of a djinn, a malevolent spirit of ancient Iranian folklore. Part psychological drama, part political allegory and part horror film (with some expertly orchestrated shocks!), “Under the Shadow” is never less than intriguing.