Firstly, thanks for your support during the year; we hope that we provided a satisfying mix of the good, the bad and the ugly in modern (non-multiplex) film.

As Richard Hall, our chair, was pleased to note, we once again topped 4,000 for aggregate attendance and, when numbers are crunched into a meaningless mean, median and mode, the average screening had 156 attendees and an average score of 74%.

In a statistical quirk 74% was the score of two of the three British films (Apostasy and Mad to be Normal) while the other (Beast) got 76%. So there we have it – the Brit flicks were the most average.

In another statistical quirk, the two German films, by the same director, got almost identical scores on the doors. French films seemed to be either loved or loathed with the fabulous Faces/Places topping the hit parade and the ironically titled Happy End scraping the barrel of badness with a wibbly-wobbly wooden spoon. Oh the irony: Happy End had the highest attendance, so we managed to annoy the most people possible there. Whoops.

So that was the year that was – eight Big Stonkers (4 stars and above) and four Bog Stinkers (3 stars or less) with the other 15 being mostly perfectly all right.

What can we take from all this? That we like to have a chuckle – three of the top four most appreciated films were funny. 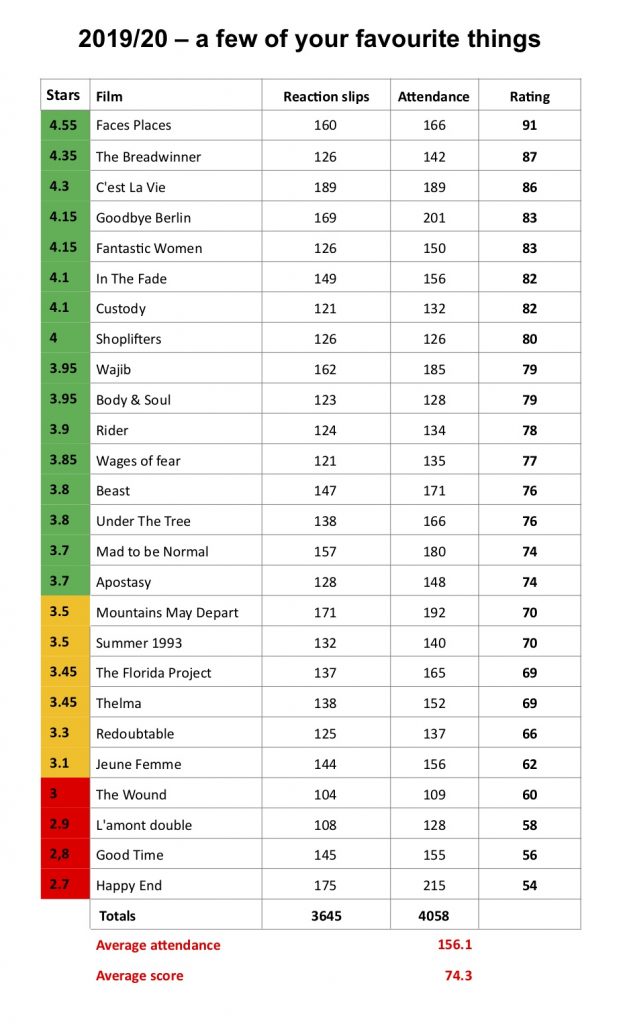